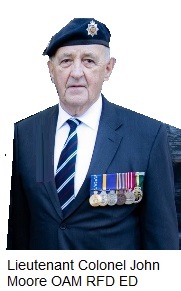 After World War 2 Australia found itself with a broadly based Regular Army for the first time. In the time up to 1948 the Australian Army was a militia (the equivalent of today's Reserve). Soldiers were part time supported by full time officers and NCOs and some soldiers in traditionally specialist corps in particularly the artillery. The new Australian Regular Army (ARA) had units covering all active corps but not the traditions of ¾ of a century of combat. The militia had formed the units that went to the Sudan, South Africa, and both World Wars and retained those traditions. The ARA anxious to carve its own traditions, effectively all but excluded Reservists and Reserve Units from deployment in combat until the mid-2000s. From 1948 'till 2005 to be deployed overseas on anything more that a combat familiarisation mission, a reservist had to resign then join the ARA, usually as a recruit or otherwise with reduced rank.

The situation in the Navy and Air Force was different. These since inception had been permanent forces with minor reserve components. But, in both cases the role of reservists in the period following WW2 was reduced.

Such lack of recognition encouraged the thenLieutenant Colonel John Moore RFD ED to work to establish a special day of commemoration in 1998. Colonel Moore established a council chaired by Sir Roden Cutler VC AK KCMG KCVO CBE the then Governor of New South Wales and himself a former reservist. Prior to World War II when he was awarded the Victoria Cross, he was RSM of Sydney University Regiment. This council with Colonel Moore as CEO and subsequently under the chair of Sir Laurence Street AC KCMG QC then The Hon Tim Fischer AC organised special recognition parades and services throughout Australia until 2018. By this time, the Reserve members of the Defence Forces were regularly deployed on peacemaking, peacekeeping and security tasks. And with the exception of Sydney were marching with pride with their regular force colleagues on Anzac Day. Meaning there was no further need of a special recognition day.

The last parade commanded by Major Len Koles RFD was held in Sydney in July 2018.

Many serving and former reservists worked tirelessly to make Reserve Forces Day a success. Four, including Colonel Moore were awarded the Order of Australia Medal in part for their work on Reserve Forces Day. This website stands tribute to their work.

To see what happened, just choose the year in the drop-down box in the top right hand corner of this page and select "GO".